A sweet heavenly fog permeates the sugarhouse.  Scent memories conjure up cotton candy and caramel apples – but I am smelling something more earthy, spicy, an aromatic sweetness that makes me hungry – not for pancakes (as it must for others) but for roasted pork tenderloin and winter squash and butter and drizzles of caramelized maple syrup. 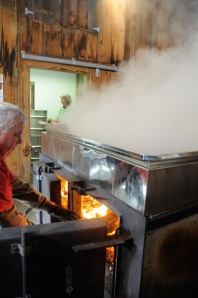 There is a roar and a blast of heat as Steve Glabach, a second generation sugar maker, opens the fire doors on the evaporator, a huge compartmentalized maple sugaring pan where just collected sap boils and bubbles.  I’ve entered a scene from Macbeth – “double, double toil and trouble; fire burn and cauldron bubble.”

And toil doth the sugarmaker while the fire burns and the sap bubbles!  Maple sugaring season is short and harried.  Sap begins an annual dance in maple sugar trees, Acer saccharum (think sucrose), in late winter when days begin to warm while nights still turn to freezing.  You can be assured that folks from hereabouts in northern New England will claim “it’s sugaring time!

Groves of maple trees, called a sugarbush in maple sugaring terms, will be traditionally tapped with spiles (spouts) and buckets or with a modern system of tubing (pipeline) running from tree to tree and a vacuum pulling sap to a central collection point.

Traditional and modern methods of collecting sap in a Vermont sugarbush

Steve Glabach and his wife, Maria, of Dummerston, Vermont use both systems and their children, Ted and Theresa, work alongside them during the short season as do other family members, friends, and volunteers.

I spent part of a day following the frenzy and was exhausted watching a young volunteer crew rushing through the sugarbush gathering sap from buckets and sloshing off to fill a storage tank pulled by a tractor.

Volunteers, family, and friends empty sap collected from buckets into a storage tank

The tractor took off down the road and pulled behind the sugarhouse where a gravity fed line brought in all the watery goodness. 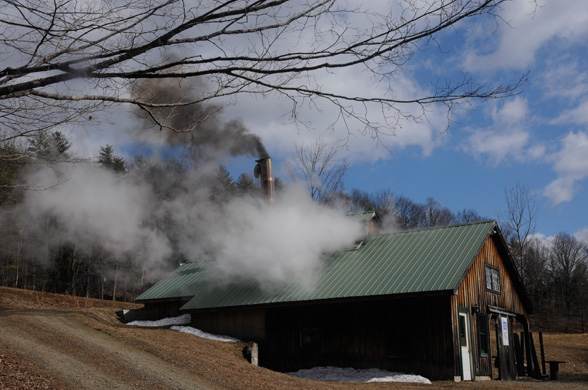 When maple sap is boiled down, water vapor forms and pours out of windows built into the top of the sugarhouse

The Glabachs, like many other sugar makers, use a reverse osmosis machine to assist in making maple syrup – it concentrates the sap for processing in a evaporator set over a heat source – an arch, or combustion chamber.  The Glabachs use wood to fire their arch and it is the combination of wood smoke and steam escaping from the sap that smells so delicious.

Days are long and nights are longer during this short sweet season.  The fire must be stoked to continue the boil drawing water from the sap and as the sap turns to syrup a constant vigilance must be kept to keep the syrup from burning and to draw off the syrup as it finishes. 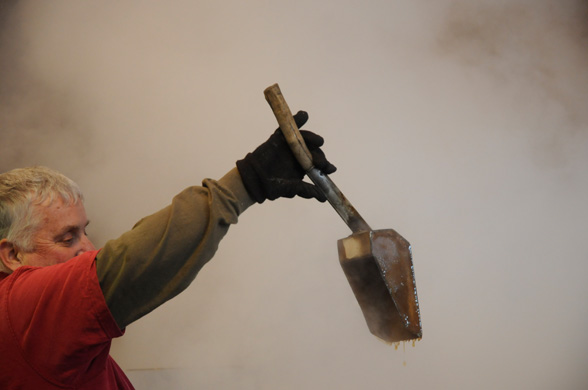 Maria Glabach in a sweet-smelling cloud of goodness 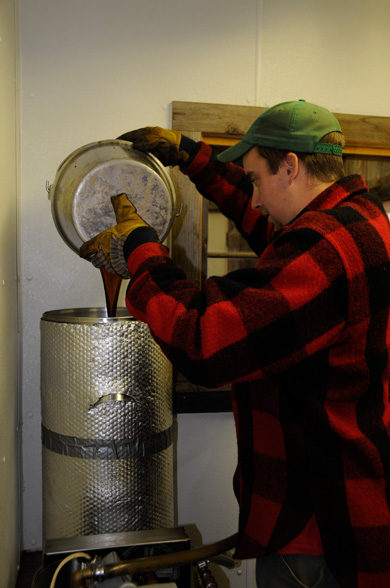 Ted Glabach pouring just drawn off syrup into one of many filtration systems used in the making of syrup – a compression system that will filter out the last large bits of minerals resulting in a sugar sand. 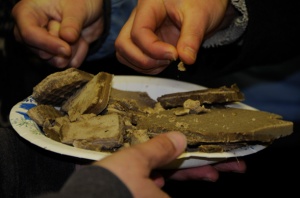 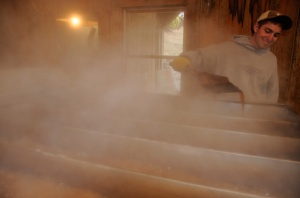 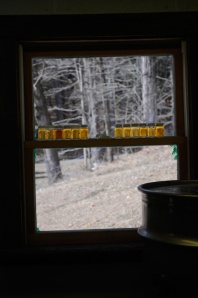 The Glabachs keep samples from each day they make syrup, note the different colors – light is Fancy, dark is Grade B

Vermont’s forests are filled with maple trees, approximately 1:4.  The higher sugar content in the sap, the less sap needed to make syrup – the rule of thumb is 40 gallons of sap to make one gallon of syrup.  Maple syrup is good for you:  calcium, manganese, potassium, and magnesium and full of antioxidants too!